The following is a list of very common programming languages and why a Pentester/Hacker should be at the very least familiar with them:

This list is by no means exhaustive or comprehensive, it's just typically the languages you'd most often encounter on pentests, exploit dev, or reverse engineering. If you can think of other uses for the languages or another language I missed, let me know.
Posted by Atucom No comments:

If you enjoy smbclient/winexe's format for specifying credentials than you will enjoy the regex I came up with to create groupings for the domain, username, and password. It also accounts for the fact that Active Directory usernames can contain spaces. Enough talk, take a look:

Run the script and view the results with different formats of creds: 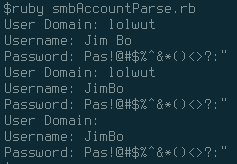 There you go, feel free to use the regex/code in your own scripts to make your life easier.
Posted by Atucom No comments:

Email ThisBlogThis!Share to TwitterShare to FacebookShare to Pinterest
Labels: Ruby

For years I relied on Python's SimpleHTTPServer module when I wanted to stand up an ad-hoc web service for file transfers. For example, using Python 2.x:

Now while this is in fact easy to remember and works quite well, it is one of the only times I ever use Python over my chosen language of Ruby. That was until I discovered the most excellently named lib 'un'. It has been included in main since Ruby 1.9.2 and allows us to stand up a web server in no time at all. For example:

Take a look in the un.rb source and you'll see it is just standing up a WEBrick server in the background.

Example of running this on my Mac:

Posted by JoSko No comments:

I recently needed a braindead https server that was mildly configurable. Ruby Webrick provides a very simple HTTPS webserver in their examples. I modified it for sane defaults and some configuration:


It automatically creates a self signed cert and by default serves the current directory over port 8443. You can change with -p port and -d directory.

Similar to my Super Simple Sinatra Webshell post, I've created a simple webshell using Ruby Rack. Simply run the below ruby script and the server will listen on 8080:

You can execute commands by simply making a Get request to /?qwer=<insert command here> (You still have to URLencode spaces and special chars)

And if someone doesn't supply the correct parameter or path, it returns a 404 (provides a tiny bit of stealthiness):

I read recently about the release of DCEPT and I thought it was an interesting implementation of a novel (albeit old) concept for trapping the dumping of passwords. Actually, it doesn't trap someone dumping credentials, it alerts sysadmins when someone or something attempts to authenticate over kerberos using the previously fake and planted credentials.

There are several ways you can know if the creds are fake or not but I decided to take a look on the network for another portion of the DCEPT install. When you set up and install the docker image you'll find a python http server listening on port 80. When I made a request to this machine I got a set of fake creds. The format is the same everytime a new one was generated:

So all I did was write up a quick scanner that checks for the expected response.

I use bash every day of my life, which means I have a fondness for one-liners. The ability to smash complex commands as a series of pipes provides a type of satisfaction and pride not often found elsewhere. Unfortunately, not everything you want to do can be accomplished using Bash builtins or common CLI programs typically installed. Instead of hunting down the "proper" way to do it, you can hack something together like I prefer to do.

Let's say I know I want to do something, but I can'd find a reliable predictable way to do with with bash utilities. I happen to also know some ruby code that would do exactly what I want. I could write a ruby script to read in from a file and process and then output, but thats a lot of hassle for a task so small. Luckily, ruby makes it very easy for us to easily pipe text into the ruby interpreter and provide ruby code to do whatever we want with that input.

Or a bit convoluted with bash for loops:

Which is a little confusing but basically means "run ruby code provided as argument"
Thats nice, but what if I need to use a method provided by a gem thats not included in the standard ruby library? as easy as:

Lastly, the -p argument can be of some use as well:

You can use -p instead of -n with a puts but things can get weird (does print at end of loop instead of puts):

You can even technically paste in scripts and have them run:

Just be careful with escaping your quotes:

Even if you try to escape the single quotes (Bash doesnt read it the way you think it should):

You'd have to use the Bash syntax ANSI strings (note the $ before the opening single quote):

Lot's of caveats and gotcha's to consider, know, and think about. Remember, pipe to ruby when it's simple and convenient. If you start getting too complicated with multiple lines and quote escapes, just put it in a file and run that instead.
Posted by Atucom No comments: