How to import "raw" IPs into Burp

If you need to test a list of IPs and *any* domains that may be on those IPs, burp doesn't exactly make it easy to enter in a large number of IPs. If you try to use the "load" button with a file of just one IP per line, it will import it, but it will also do something extremely annoying:

Those regexes? They mess up everything. Before if you entered 1.2.3.4, ANY domain name that resolved to that would show up in the filtered sitemap, now only instances of "1.2.3.4" show up, and if you visit the domains, they no longer appear, because they don't match the regex.

I finally figured out how to upload a "raw" list of IPs into the scope listing unmodified. Burp has a feature on a tiny button that allows you to "load options", which is really just a json formatted file with a bunch of different Burp settings: 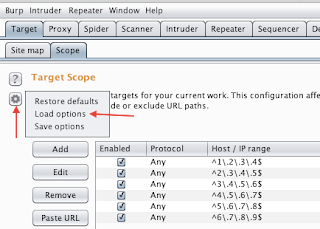 So I decided to take a look at the format, and holy crap, "raw" IPs are actually recognized properly in this settings file. So I wrote a quick python script to create a proper settings file from a supplied list of IPs:

To use it, run the script and supply the file with you one-per-line IP list. It will dump out a "jsonout.txt" file. In Burp, go to Target > Scope > Gear Button > Load Options > select jsonout.txt > Open

That should be it, your IPs should now show up in the "include in scope" box like below:

I always assumed there had to be a supported way of doing this but after asking several people, nobody could find a way. This seems to be the only way that works for what I need done. Now, I just need to write up a Burp extension for it...

UPDATE:
Thanks to the help of a friend of mine with the Burp plugin code, I've been able to create a burp plugin that accomplishes this task:
https://gist.github.com/atucom/eabf35f344f46ffbd2f8d25b018f88c9
Posted by Atucom