I recently got my hands on a Noritake CU24025ECPB-U1J Vacuum Florescent Display. I always enjoyed the retro 80s/90s feel of VFDs and wanted to gain some experience with with one. Below is a picture of the back for reference:

The model VFD I got comes with its own driver board so its super easy just to send it the text you want over the parallel lines and the VFD driver takes care of the rest. Lots of Noritake's models state that there is a 5 or 6 pin serial port on the driver board allowing you to use sync/async serial instead of parallel. Well I must have been the unlucky one since apparently all I have is a parallel connection (on the far right of the above image). Luckily thats no big deal because Noritake's documentation and sample files make life quite easy.

There are several parts to getting this VFD to work.

The Hookup
Hookup was relatively easy once you found the proper documentation to tell you what the pins are.
The only thing even close to a datasheet for my exact model of VFD was off of DigiKey's website: https://media.digikey.com/pdf/Data%20Sheets/Noritake%20PDFs/CU24025ECPB-U1J.pdf
There you can see the pin layout towards the bottom of the page: 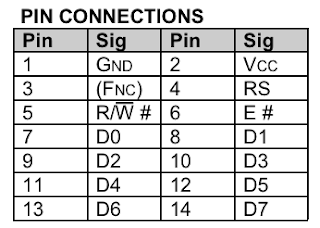 If you are using the sample code outlined later in this post, the connections for the parallel connector to the Arduino are below:

Now that you have it hooked up, double check your connections so it looks like this: 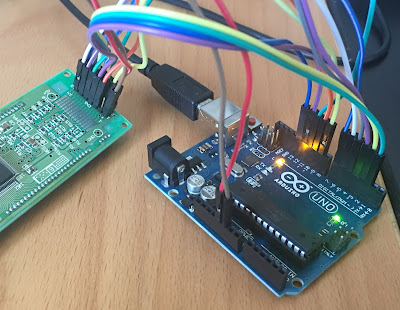 Downloading The Library
Noritake provides an Arduino library at https://www.noritake-elec.com/user/download?id=Arduino_Noritake_VFD_CUU&category=10&type=cuu

Download the Zip, add it to your Arduino Libraries by going to Sketch > Include Libraries > Add .Zip Library. Once I did that it didn't show up in the menu listing of my libraries but did show up if you clicked "Manage Libraries" as "cuu".

Uploading The Sample Code
Below is the code I used/modified to get it working for my board. I only changed the mode I was using and the pin configurations but other than that its basically the same as the sample code Noritake provides on their QuickStart guide: 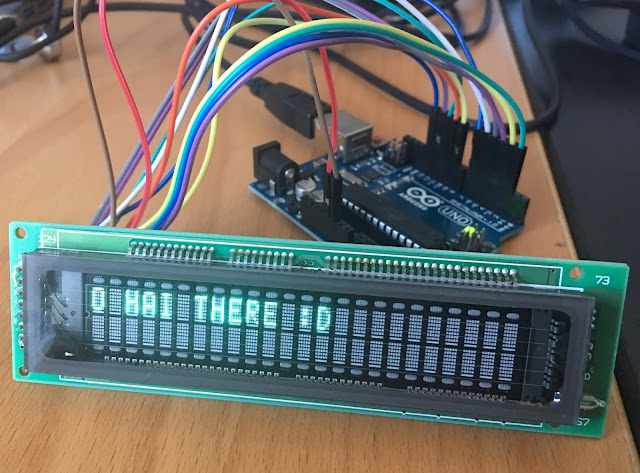 And enjoying it, I am. Noritake made it relatively easy to get up and running quite quickly, so I greatly appreciate that.

Now the next step is to modify the code so it takes input from a serial connection so I can control it using a python script. Maybe a retro twitter scroller? I dunno :D

Email ThisBlogThis!Share to TwitterShare to FacebookShare to Pinterest
Labels: Hardware, Just For Fun